Certainly, not many hunters from our region know that in a small town called Sośnica, located between Przemyśl and Jarosław, for many years a friend lives, who is considered one of the best producers of hunting weapons stocks in Poland. His name is Witold Kunysz and he agreed to give me answers to several questions that I want to share with the Readers. 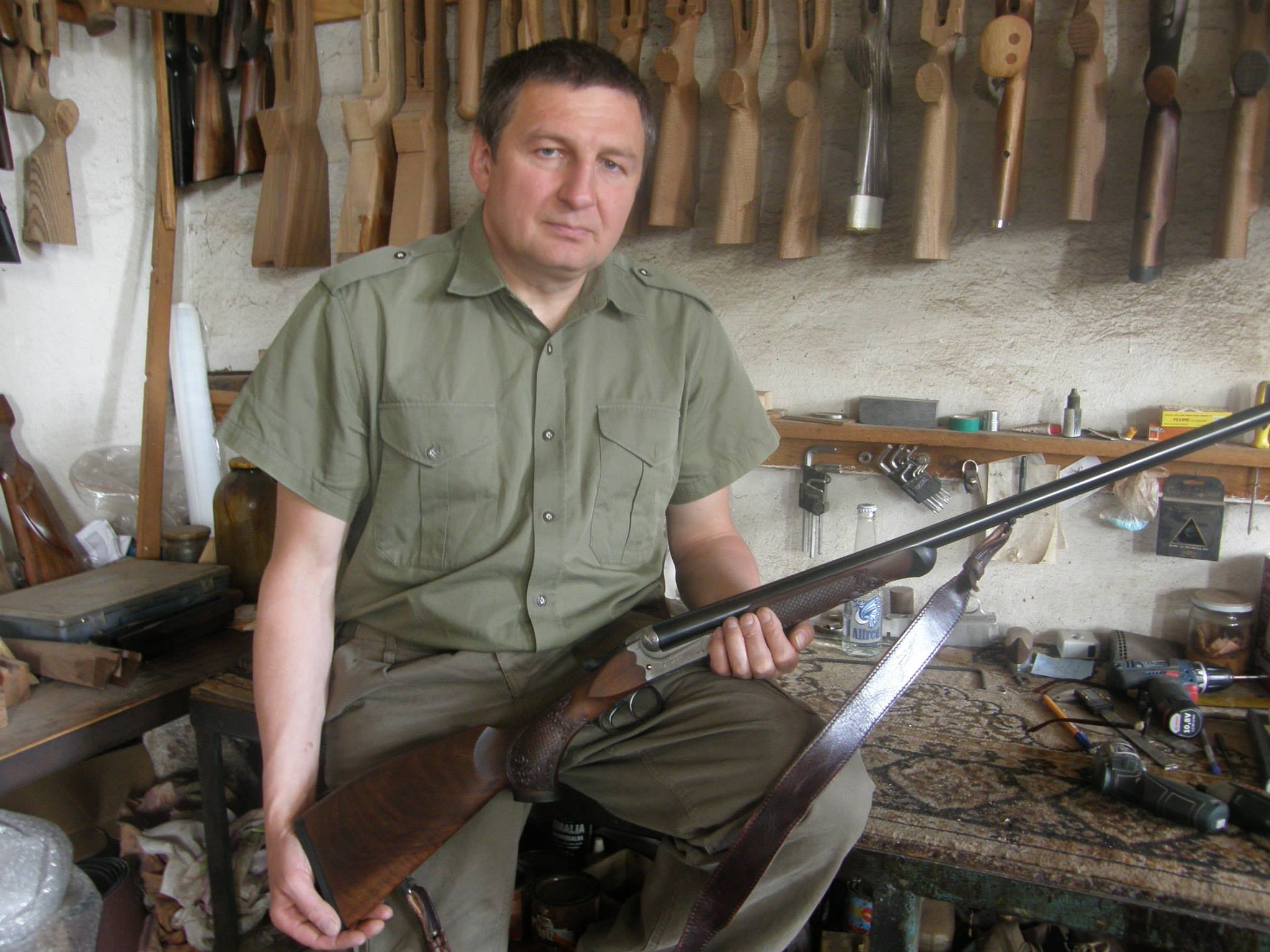 J. Karpierz: At the beginning, a bit of history. How did it happen that a long-time active hunter, hunter of a hunting club, took care of a professional stocks of weapons and achieved such significant successes in this field? After all, it's no secret that a friend is in the forefront of "stockers" in Poland.

W. Kunysz: In answering this question I should start from the time of my early youth. I have always been passionate about hunting and hunting. Closer contact with real hunting occurred in the early 90s thanks to uncle Marian, who was a hunter, hunted in the Hunting Circle "Bear" Przemyśl and caused that I became infected with this passion. It was with his help that I soon became a member of Przemyśl's "Paszkot" Hunting Association, and this relationship continues, until today, and even the entrusting of a hunter function to me a few years ago. I fulfilled my professional life at the time as a carpenter. The fact that I was also involved in the making of stocks for weapons was decided by accident. The aforementioned uncle Marian, like many other hunters at the time, bought an old, well-worn Mosin rifle from the military clearance sale, and decided to make a racial hunting rifle from it. So he came to me, he brought some photographs and folders depicting branded rifles and together we started this ambitious work starting from making a new stock. After a few days of hard work, something like a stock was created, because from the perspective of time, I judge this today, but that was the beginning. At Mosiny, as a typical self-taught, I began to learn the art of spinning, because after difficult beginnings, I gradually made more and more these flasks. A few years later, my Austrian garage, Voere, with a broken original butt, came to my workshop. Only then, when I was making a new stock, I had the opportunity to see and learn to perform at a professional level. More or less from this moment, i.e. since 1997, he has been professionally engaged in making only sludge for various types of weapons. The first major works are again several hundred pieces of flasks in the course of several years for the Mosin rifle performed for a company from Warsaw, which processed them serially and then a large order of rifle butts for honor companies of various types of troops. From the beginning of 2000, I produced about 1,000 copies of these flasks, using specially prepared plywood. They successfully serve today, so with pleasure and even a certain satisfaction I watch them on television on the occasion of major state ceremonies with the participation of honorary companies. Currently, I make a very wide range of weapon stocks, ranging from typical flasks to hunting weapons, including Polish representatives of leading European companies through various types of sports stocks, so-called. regulated and intended for high-scorers, and ending with untypical sediments, made to individual orders, often from high-class and specially decorated wood.

J. Karpierz: And now a topic that will certainly be of particular interest to our readers. Among hunters I have heard many times saying: "The barrel shoots, but the stock is aimed". What is the colleague's opinion on this matter?

W. Kunysz: This is a fairly accurate saying, although I would modify it a bit and say: "The barrel shoots, the barrel hits." The way the stock is made in the context of its selection for the individual construction of the shooter is very important, especially in the case of shotguns and shooting for mobile purposes. Sludges made at the factory are made in such a way that they fit everyone, and from experience we know that if something is to be good for everyone, it is often not good for anyone. There are a few simple parameters defining flasks that determine its quality, which translates directly into the usefulness of the weapon for a particular hunter. I will mention here only the most important ones, influencing its ergonomics, that is: the length of the flask, the distance from the handle to the trigger, the thickness of the handle and the composition of the flask, i.e. the height of the flask in relation to the aiming line. Of great importance, especially to the composition, is also the so-called sparring, i.e. the side deviation of the flask and its shape. All these parameters are essentially individual for each hunter and result from the anatomical structure of the individual. If someone manages to buy a weapon with a stock they fully fold, you can say that he won the lottery ticket, because situations are much more likely to happen for many years. We shoot the shotguns and numerous training sessions at the firing range, and the weapon is clearly "not lying". If we shoot not much, eg only when hunting, the problem is not particularly noticeable, because everybody quite often happens to be boxing. The situation is different in the case of people who practice shooting, shooting thousands of ammunition on shooting ranges. In achieving good results, only talent is no longer enough. Very often the advantage is obtained by fractions of seconds obtained during multiple aiming, and resulting from matching the weapon stock to the shooter, which in this case is of fundamental importance. Therefore, you can rarely see cases of using pre-made flasks by professional shooters.

I think that in a brief telegram, I answered the question, I would have to devote at least a few hours to the subject in order to present it in more detail.

J. Karpierz: What has changed over the years in the technology of making stocks, is it still tedious and mostly manual work? How much do you do with handicrafts and how much artistic activity?

W. Kunysz: As in many other areas, in the generation of stocks, there has been considerable technological progress in recent decades. I can now use special milling machines controlled by computer programs, which they perform as a human being, often showing greater precision, about 70% of the work associated with making the flask. But the human factor in this process is irreplaceable, because the remaining 30% decide in the majority on the class, quality and, as a result, on the suitability of the product. Thus, the 70% that implements the machine can be conventionally called craft, while the rest requiring artistic sense and extraordinary manual skills certainly has something of artistry in them. The more so because more and more often on individual orders, are made deposits from the so-called woodcarving, or sculptures in wood.

J. Karpierz: The last decade is the time of mass production of synthetic sediments, which are of more practical opinion in use, and, above all, are much cheaper for the buyer. As you can see in this connection, the future of wood sediments is seen by the colleague, especially those made of rare nut varieties, seasoned for many years and, therefore, sometimes achieving very high prices. Are there any clear new trends here?

W. Kunysz: Indeed, recently, producers of hunting weapons, often forced by the necessity of lowering the price of products in the fight for customers, decide to use cheaper elements from various types of synthetic composites instead of traditional wooden ones or metal ones. This is particularly evident in the American producers, where, traditionally, less attention has been paid to the appearance of weapons for centuries, and more to its practical and utility values. This is probably due to the model of hunting in America, focused mainly on hunting itself, or acquiring animals. At present, however, and in Europe, the majority of major arms producers offer models with synthetic sediments. This has undoubtedly its advantages, such as a lower price of weapons at the time of purchase, practicality in use consisting in greater resistance to scratches or other damage, and therefore less need for frequent cleaning and maintenance. But he also has many disadvantages, the most important of which I consider much worse, and sometimes even tacky, to defend even the best companies. And the appearance of a weapon, especially a hunting one, in my opinion is very important. Observing the tendency that is progressing in our country in recent years, it can be boldly said that in Poland "fashion" is born for beautiful weapons. This is probably related to the general changes that take place in our hunting model, and thus more and more attachment to historical traditions, including clothing, the cultivation of hunting habits, respect for game and hunting weapons, which sometimes turns into a kind of worship. Not without significance is the growing wealth of the portfolios of contemporary Polish hunters, although this is not the most important factor. Anyway, the purchase of hunting weapons "from the upper shelf", richly decorated with engravings, with a stock made of rare varieties of high-class nut is often treated as an investment, for example in a work of art, which in time may bring a good profit. To sum up, however, I want to say that I do not feel fears about the expansion of these synthetics, and from practice I have learned that many of the hunters who bought such weapons after some time, shorter or longer, come to me and order a wooden stock.

J. Karpierz: Did the colleague replace his stocks with new ones, made by hand, or original factory ones?

W. Kunysz: As the old saying says that "a shoemaker in torn shoes is walking" in my way In recent years I have found time to make the right flasks for myself. So today, the proverbial shoemaker is already wearing good footwear. And I have to boast that I felt the difference right away. Wild birds, that is ducks and pheasants, much more often they visit my table.

J. Karpierz: So I congratulate and thank you for the interview. Darz Bór.

Text automatically translated from Polish to English by Google Translate.